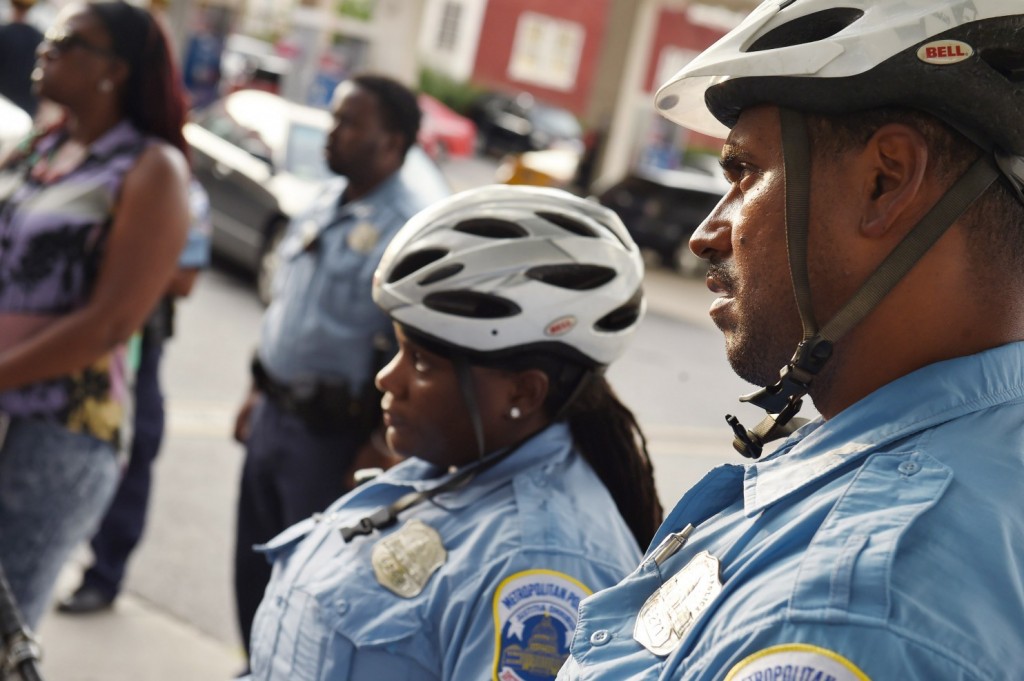 The gunman ran up Georgia Avenue, shooting along the way. Struck in the back, the 33-year-old victim collapsed in front of a Metrobus. A witness on the bus told police the assailant “stood over him and shot him two more times.”

This brazen killing last month in Northwest Washington’s Park View neighborhood, described in a police report, underscores the renewed violence that is surging across the District. It occurred at 9:30 p.m. and was witnessed by a man looking out a nearby window.

“Straight up execution,” the man said in an interview. “Right in the middle of a main thoroughfare of Washington, D.C.” The slaying remains unsolved.

Authorities are grappling with the District’s escalating homicide count. As of Sunday there were 93 so far this year, a 23 percent increase over the 72 at the same time last year. One challenge for police is that the violence has not been contained to any particular part of the city. 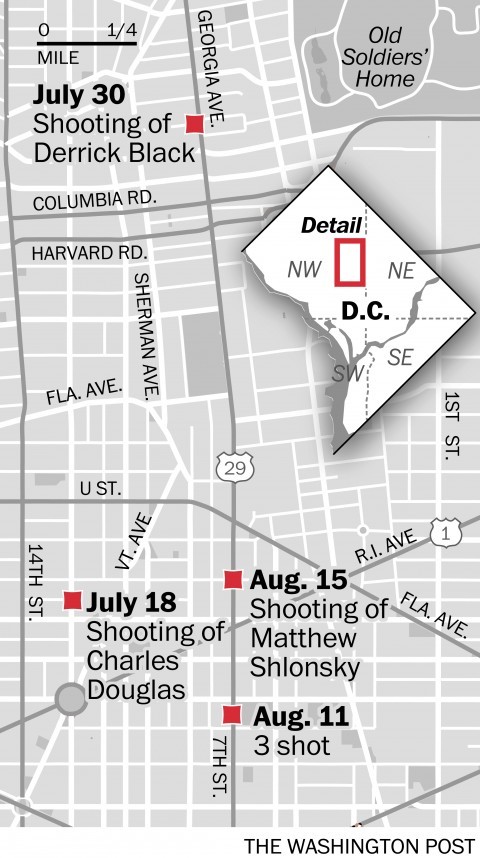 Although some areas that have been persistent pockets of crime continue to see shootings, the uptick in violence also has affected many neighborhoods that have been targeted for growth and revitalization. Residents in Northwest are complaining about more gunfire, from Columbia Heights to Petworth, from Park View to Logan Circle.

Three people have been killed in Columbia Heights this year, and a man reported being abducted from a bus stop on Georgia Avenue and gang-raped in a van. The slaying near the Metrobus occurred just a few blocks south. Closer to downtown, another man was shot and killed on July 18, just off Logan Circle’s 14th Street, a onetime prostitution strip that has transformed into a bustling entertainment district.

“It would be nice to see the police walking up and down,” said John Fanning, chairman of the Logan Circle Advisory Neighborhood Commission. The July fatal shooting there occurred in the same area where nearly two years ago a stray bullet flew over 14th Street and the heads of sidewalk diners, crashing through the window of a wine shop.

There also is concern in adjacent Shaw, one of the District’s most historic neighborhoods. In the midst of its own makeover, it is home to the gleaming new City Market — upscale apartments with solar window shades over lines of fresh food stands.

The 7th and O Street crew once ruled this turf, quieted by a cease-fire in 2007. But blocks near the market have erupted in gunfire this year — eight shootings, including a drive-by that left three young men wounded Tuesday night. It occurred just steps from where a Shaw community leader, Tamara Gliss, was killed by a bullet fired into a crowd on Memorial Day. On Saturday afternoon, Matthew C. Shlonsky, 23, a 2014 graduate of American University, was killed by gunfire, just blocks from the scene of Tuesday’s shooting.
Mapping homicides in the District and the surrounding suburbs since 2000. View Graphic

Authorities say they have not identified any one factor driving the violence. The shootings in Shaw and Park View seem indicative of the broader spike in violent crime — old and petty disputes, the simplest of slights — turning deadly. Police say they’re seeing more bullets fired, more scenes with multiple victims, more powerful guns. D.C. Police Chief Cathy L. Lanier said Thursday that repeat violent offenders, including ones implicated in past killings, are part of the problem.

Police say they are trying to put as many officers as possible on foot and bicycle patrols, shifting them to address problem spots. They also have attended community meetings and met with residents holding a neighborhood march.

The police union blames the violence on a shrinking force trying to police a growing city. Others think a new generation of gunmen are settling long-dormant disputes.

“I think people feel like these crews and these neighborhood beefs never really left,” said Council Member Charles Allen (D-Ward 6), which includes Shaw. “They still exist, and this problem is certainly not unique to one neighborhood. A block from my house, we had guys hanging out car windows pumping bullets into a guy. It’s something we’re experiencing this summer.”

District officials say crimes with guns have surged 34 percent this year in Petworth and 9 percent in Columbia Heights, compared with last year, for example. In some areas, such as Logan Circle and Shaw, gun violence has dropped slightly, although residents say they continue to be concerned.

Even with the recent violence, a study by the Urban Institute concluded that the District’s crime levels remain at historic lows, and homicides tracked over the past 15 years have shifted away from areas that are rapidly developing. The institute singled out Navy Yard, where crime fell from 59 for every 1,000 residents to six since 2000. The Chinatown, Mount Vernon and downtown areas also saw a decrease during that time.

In some areas, neighbors are stepping up to do more to keep the streets safe. Adrian Washington runs the Neighborhood Development Co., which moved in the past year from Petworth to Lamont Street in Park View. His company has put up condominiums, an organic market, helped build a charter school and a yoga studio. More is in the works.

Georgia and Lamont is also where 24-year-old Derrick Black was shot in front of the bus the night of July 30, his shooter disappearing into Park Morton, a public housing complex that clings to the edge of the new development. Washington has launched a public safety task force, harnessing the resources of his company to help residents mobilize against blight and crime.

“We knew it was an area in transition,” Washington said. “But over the last few months, we saw things getting worse and worse. More people drunk or high, hanging out all day, some looking like they were selling drugs.”

Washington, who is 56 and grew up in Anacostia, said he doesn’t think the violence will hold back Park View or other neighborhoods.

After Black was killed, followed by another shooting a few streets down and a half-hour later, also in Park View, residents met with police. “We hear two things from police,” said Ryan Pougiales, 32. “That they’re overextended and that we’re seeing the nuisance side to drugs.”

Pougiales said that when he moved to the neighborhood four years ago, the drug-dealing seemed quieter. “In the past it was people who were more concerned with doing their business. Now, it looks to be a younger set of kids out there, staking out their territory, and they are confrontational.”

At a community crime walk with police Tuesday night in lower Columbia Heights, along Georgia Avenue just a few blocks up from Park View, talk of crime included concerns about trash, loitering and prostitution. D.C. Council member Brianne Nadeau (D-Ward 1) led residents and police on a tour along Georgia Avenue and houses off Perry Place.

The District says there have been 49 gun crimes in the lower part of Columbia Heights this year, up from 40 at this time in 2014. Three people have been fatally shot in the past seven months. Police are planning a meeting Wednesday for community residents.

During the crime walk, D.C. police Lt. David Augustine talked about the officers charged with keeping order — in cars, on mountain bikes and on foot. Seventy-four arrests in that area since June 1. “We’re here,” Augustine told residents. “We’re doing stuff.”

Police urged assistance from other agencies so the full brunt of social problems doesn’t fall on them. “It’s quality of life,” said police Cmdr. Wilfredo Manlapaz. “It’s people loitering. It’s people drinking in public. We have to balance how we respond. We just can’t arrest everybody.”