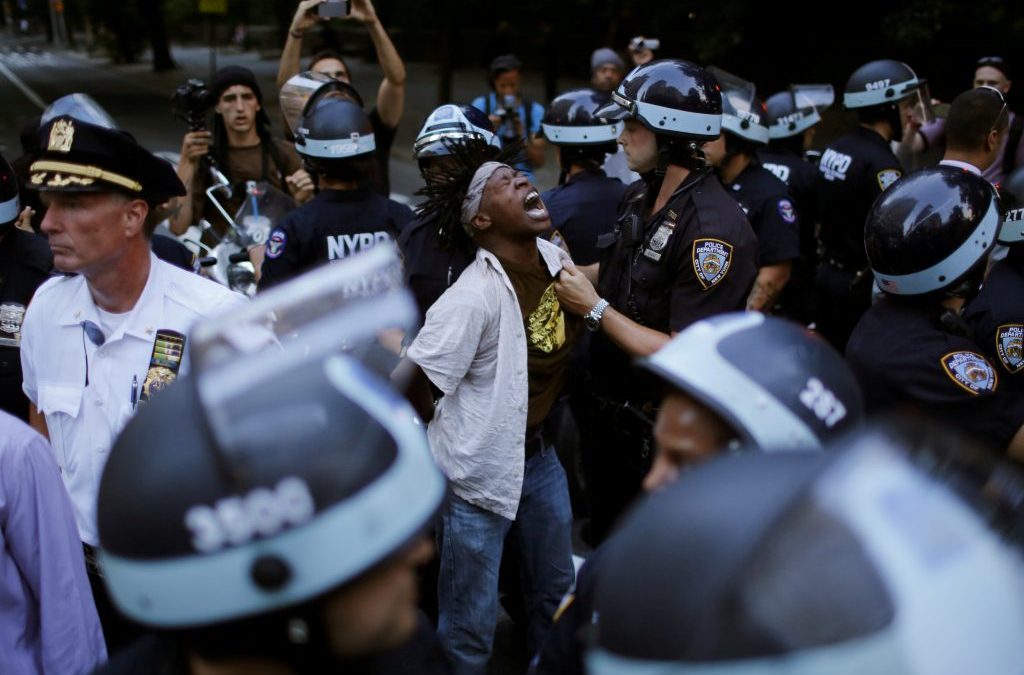 In July of 2016, Kenya Downs published and extensive article on When black death goes viral, it can trigger PTSD-like trauma for PBS

`When video of the Baton Rouge shooting death of Alton Sterling first surfaced on July 5, social media networks became immediately populated with Sterling’s final moments. The following day, the shooting death of Philando Castile was streamed live by his girlfriend on Facebook. The video, which shows Castile gasping for air after being shot four times by a Minnesota police officer, has since been shared on Facebook more than 5 million times.

Outrage peaked again after cell phone footage captured a North Miami police officer shoot an unarmed caretaker as he lay on the ground with his hands up. Charles Kinsey, a behavioral therapist, was aiding an autistic patient who wandered away from his assisted living facility. Kinsey survived with minor injuries. Now, footage of the fatal shooting of Terence Crutcher in Tulsa, Oklahoma, has people calling for justice yet again. The 40-year-old was shot and killed by Tulsa police officer who responded to a report of a stalled SUV.

Escaping the imagery can be nearly impossible, especially as online users post commentary and news updates. For some, it can merely be a nuisance. But research suggests that for people of color, frequent exposure to the shootings of black people can have long-term mental health effects. According to Monnica Williams, clinical psychologist and director of the Center for Mental Health Disparities at the University of Louisville, graphic videos (which she calls vicarious trauma) combined with lived experiences of racism, can create severe psychological problems reminiscent of post-traumatic stress syndrome.

“There’s a heightened sense of fear and anxiety when you feel like you can’t trust the people who’ve been put in charge to keep you safe. Instead, you see them killing people who look like you,” she says. “Combined with the everyday instances of racism, like microaggressions and discrimination, that contributes to a sense of alienation and isolation. It’s race-based trauma.”

While research on the psychological impact of racism has only emerged within the last 15 years, Williams says it’s “now starting to get the attention that it deserves” and experts are “seeing very strong, robust and repeated negative impacts of discrimination.”

A 2012 study found that black Americans reported experiencing discrimination at significantly higher rates than any other ethnic minority. The study, which surveyed thousands of African-Americans, Hispanics and Asian-Americans, also found that blacks who perceived discrimination the most, were more likely to report symptoms of PTSD. Although African-Americans have a lower risk for many anxiety disorders, the study reported a PTSD prevalence rate of 9.1 percent in blacks, compared to 6.8 percent in whites, 5.9 percent in Hispanics, and 1.8 percent in Asians.

Social media and viral videos can worsen the effects. During the week of Sterling’s and Castile’s deaths, a scroll through timelines of black social media users could uncover subtle expressions of mental and psychological anguish, from pleas for others not the share these videos, to declarations of a social media hiatus. Williams says that’s not unusual. These expressions of anger, sadness and grief can hint at something much more serious.

“It’s upsetting and stressful for people of color to see these events unfolding,” she says. “It can lead to depression, substance abuse and, in some cases, psychosis. Very often, it can contribute to health problems that are already common among African-Americans such as high blood pressure.”

That stress is the reason why April Reign refuses to share the graphic final moments of Alton Sterling and Philando Castile. In a column for the Washington Post, the former attorney and now managing editor for Broadway Black — which reports on African-Americans in the performing arts — calls the need to share viral footage of police shootings “a sick sort of voyeurism.”

Reign says opponents have pointed out that it sometimes takes the graphic videos going viral before issues of police brutality and racial bias are given any attention. Both Sterling and Castile’s deaths sparked national and international protests after first being shared among black users of platforms like Facebook and Twitter. While Reign agrees, she calls decisions to shield certain footage “selective censorship,” often influenced subconsciously by racial bias.

She points to last August as an example, when many national media outlets opted not to air the graphic footage of news reporters in Virginia as they were shot and killed by a former coworker on live television. Many news organizations cited respect for the victims and their families as the basis of their decision. Reign says that sense of humanity isn’t typically given to victims of color, especially black-Americans. Instead, their gruesome final movements are replayed again and again for all to see.

“It is a dehumanization of black people, and we don’t see that with any other race. It’s ingrained in us from our history,” she says. “White people used to have picnics at hangings and at lynchings, bringing their children to watch black bodies suffer and die. We are not far removed from that, it’s just being played out through technology now. And it hurts.”

“White people used to have picnics at hangings and at lynchings, bringing their children to watch black bodies suffer and die. We are not far removed from that, it’s just being played out through technology now. And it hurts.”

Dr. Williams says that history of racism, passed down through generations of storytelling, can become crippling when combined with personal experiences, including daily microaggressions — subtle, racially-insensitive comments or acts such as a person of color being followed in a store, or having their name mocked or mispronounced by peers.

The physical impact is something Black Lives Matter activist Brittany Packnett knows all too well. “Racism is not real to a lot of people, period,” she says, “But what people also don’t seem to get is how [black people] internalize that racism and manifest that suffering because, for so long, we’ve been conditioned to hide it. But’s real. It marks us everyday.”

Packnett can recall every time she learned of a new person of color killed by law enforcement. In each instance, she struggled with whether to watch the video, and can recount the emotional reaction when she did.

“I hadn’t had nightmares about Ferguson and tear gas or protests for a long time, but they came back when I saw those videos,”

Packnett says referencing the shootings of Sterling and Castile. Avoiding them wasn’t an option. Both, she says, were set to automatically play on her Facebook timeline.

“I hadn’t had nightmares about Ferguson and tear gas or protests for a long time, but they came back when I saw those videos.”
“I saw the Tamir Rice video while sitting in the parking lot next to the park where he was killed. In hindsight, did I need to feel that pain watching the video in order to fully absorb what clearly was a tragedy? No. So why did I? Pressure.”

Packnett said that activists also feel an expectation to speak authoritatively on these subjects immediately after. “We’re supposed to be able to provide language for people’s grief that is informed. And in order for it to be informed, there’s this unspoken obligation to consume the images, to watch the videos. It’s easy to forget that activists are affected too.”

Amid the protests and pressure associated with being a public figure, Packnett finds herself still needing to take a break and unplug from the rest of the world. “I finally learned when to genuinely disconnect. Yes, I know I’ll be coming back to tragedy and sadness, but at least when I do I’ll be coming back on a full tank instead of nearly empty.”

Williams acknowledges that even the most experienced therapists can lack the cultural understanding necessary to treat minorities who exhibit symptoms of race-based trauma. The key, she says, is seeking help from culturally competent professionals or even loved ones. July marks Black Mental Health month and the Association of Black Psychologists have released guidelines for African-Americans experiencing cultural trauma from recent coverage of racial tension in the media and online.

April Reign says the first step is simply recognizing when racism and the deaths of minorities played out publicly is becoming overwhelming.

“Recognize that if you’re numb, that means something. If you’re breaking down in tears, that means something,” she says. “It affects you more than you know, and there is nothing wrong with saying that this pains you. Understand it, and actively move toward healing yourself.”