Gun violence: who’s accountable when a child is charged with manslaughter? 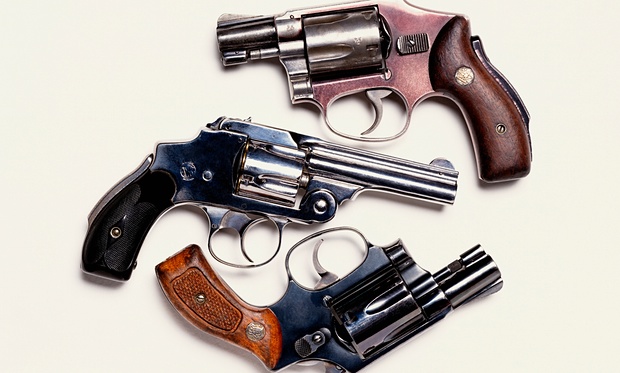 There have been at least 13 unintentional shootings by children under age 17 this year in Michigan alone – nearly half resulting in death. Photograph: Peter Dazeley/Getty Images

An 11-year-old boy was charged with manslaughter in Detroit this month for the fatal shooting of a three-year-old, after the boy allegedly found a gun at his father’s house. On Monday, his father was arraigned on several criminal charges, including involuntary manslaughter.

Wayne County prosecutor Kym Worthy said in a statement on the boy’s charges that “very unfortunately and very tragically, the alleged facts in the case demanded it”.

Yet it remains exceedingly rare to charge a juvenile that young for killing someone, especially in cases when a shooting might be considered an accident. And experts say parents are not frequently charged for child shootings, raising questions about where accountability belongs for gun violence.

In 2013, 14 children under the age of 12 were charged with murder and non-negligent manslaughter, according to the FBI.

Details of the Detroit case remain scant. On 3 August, the 11-year-old went to his father’s home on Detroit’s east side. Around 1.40pm that day, the boy allegedly grabbed a handgun from a bedroom closet, tossed it out a bedroom window into the backyard, and retrieved it, before entering a nearby vehicle, according to the county prosecutor. The three-year-old, later identified as Elijah Walker, entered the parked vehicle, and, moments later, was shot in the face by the 11-year-old.

Prosecutor Worthy said she can’t remember a time her office has charged someone that young “with taking a life”.

The 11-year-old was charged as a juvenile with manslaughter and felony firearm. A judge in the county’s juvenile court system has since granted a request for a competency exam to determine if the boy is fit to stand trial. The child’s parents and his attorney could not be reached for comment, despite several attempts.

The father was also criminally charged on Monday, on counts of involuntary manslaughter, second-degree child abuse, felony firearm and weapons. The prosecutor’s office said in a press release that the father, Curry Bryson, stored the firearm in a “grossly negligent manner”, although Bryson said in an interview with the Detroit News that the gun was locked up.

The problem, said Shannon Watts, founder of Moms Demand Action for Gun Sense in America, is that Michigan doesn’t have a so-called Child Access Prevention (CAP) law, which requires guns to be stored in a place children cannot access. Those laws have accounted for a substantial drop in accidental shootings of children, experts say – but no state has adopted the statute since 1999.

“It’s time to hold adults accountable for responsible firearm storage – or we will continue to read news reports of children’s lives being devastated by gun violence, as in the case [of] both the three-year-old and 11-year-old boys in this Detroit tragedy,” Watts said in an email, before the announcement that Bryson would also be criminally charged.

Adam Winkler, a UCLA constitutional law professor who studies gun laws, said there are other charges that would hold parents accountable. “It could be negligent endangerment, from leaving a gun around that a child can get their hands on; it could be a violation of the … state’s safe storage laws,” he said.

Currently, no data exists on how often parents are charged in the US for violating a CAP law even in those states that do have them. “We have some reason to believe that, at least anecdotally, it’s relatively rare,” according to Johns Hopkins’ Vernick. In most states with a CAP law, the violation amounts to a misdemeanor offense.

“So that reduces the incentive that prosecutors might have to bring the case,” Vernick said. “And sometimes, the criminal justice system is reluctant to charge a grieving parent.”

Still, said Barrett, “The buck has to stop with the adult, and not the 11-year-old. That’s ridiculous.”

In 1989, Florida passed the first CAP law, forbidding storage of a loaded firearm in a location where a minor could gain access “without the lawful permission of the minor’s parent”. Over the following decade, an additional 17 states followed suit.

“[CAP laws] prevent children from shooting each other accidentally because it’s hard to get your hands on a gun if it’s locked up,” Winkler said.

The laws appear to have had a tremendous impact in reducing the number of accidental shootings.

“[CAP] laws are associated with lower rates of both accidental deaths among children, and even suicides of teenagers,” said Vernick. “And that’s probably not terribly surprising because when a teen commits suicide, it’s overwhelmingly with the gun he or she finds in the home.”

Vernick said he can’t offer an explanation for why more states haven’t moved to adopt similar legislation. The National Rifle Association has for years maintained staunch opposition to the legislation.

There’s another layer to the case that has legal observers concerned: the psychological implications of prosecuting an 11-year-old.

Deborah LaBelle, an Ann Arbor attorney who is representing several juvenile plaintiffs in a case against the Michigan department of corrections, said pre-teens typically understand “right from wrong”.

“But that’s very different from asking, ‘Do you have the capacity to see what the consequences of your actions might be?” she said, adding, “and what we know from brain research is absolutely not … they don’t think in that way.”

LaBelle, whose case against the state of Michigan alleges juvenile prisoners were raped and abused behind bars, said involving the criminal justice system in this case “seems pointless”.

“The child is probably traumatized,” LaBelle said. “He can’t go to a PG-13 movie, so to see your friend or cousin’s face blown off has to be a traumatic event.”

Typically, LaBelle said, the purpose of the juvenile court system is to determine what’s in the best interest of the child.

“I can’t believe what’s in the best interest of the child is [to be] dragged in the criminal justice system, albeit the juvenile court,” she said.

The 11-year-old will return to court on 9 September. As a condition of his bond, he is not allowed to be in a home with a gun.

Resource: Gun violence: who’s accountable when a child is charged with manslaughter? – The Guardian